Aryl hydrocarbon receptor (AhR) modulates the biochemical and toxic effects of a wide variety of environmental compounds and plays an important role in adaptation of organisms to environmental stress [1]. Responses mediated by AhR include transcriptional induction of Phase I and Phase II metabolism genes such as CYP1A1 [2].

where EC50 is the half maximal effective concentration. Reference chemical is the most potent AhR agonist 2,3,7,8-tetrachlotrodibenzo-p-dioxin.

Another training set consisting of 51 chemicals with gene expression (GE) data have also been collected. Of them, 23 chemicals have data for both AhR binding and GE. These chemicals were used to establish a relation between binding and GE.

The TIMES AhR model has been developed for predicting: AhR binding, agonistic/antagonistic properties and gene expression.

A battery of structure-activity relationship (SAR) models for predicting AhR binding based on two distinct mechanisms has been developed [3]. One of these mechanisms is based on electron charge transfer from ligands to the Ah receptor. This mechanism is associated with dioxin-like compounds, where a favorable interaction with a receptor nucleophilic site in the central part of the ligand and with electrophilic sites at both sides of the principal molecular axis is required. Same mechanism is also associated with polycyclic aromatic hydrocarbon (PAHs), where a   stacking-type of interaction with the AhR is required. The second AhR binding mechanism is associated with biphenyl-like compounds which unlike the above chemical classes are found to accommodate electron density from the receptor.

The model is also trained to identify agonists and antagonists. While agonistic properties are related to ability of substances to elicit gene expression when bind to a receptor, antagonism is obtained when substances fail to trigger gene expression. In case of antagonism, chemicals bind to the receptor surface through the electron-donating properties of electron-rich groups which retain the receptor in the cytosol and does not allow AhR-dependent signal transduction [4]. Hence, SAR model accounting for antagonism has been derived and incorporated in the model, as illustrated in Figure 2:

First, strong binders are screened for antagonistic properties. If criteria for antagonism are met, substances are assigned to be antagonist. Negative response in this SAR classifies substances to be strong agonist. Similarly, weak binders could be classified as antagonists or weak agonists.

For the training set of 142 chemicals, the AhR binding model was able to predict correctly 83% of the strong binders, 73% of the weak binders and 63% of the non-binders, i.e., an overall performance of 71% is achieved.

Applicability domain of the AhR model consists of two sub-domain layers: general parametric requirements and structural features [5]. Two chemical subsets are used for deriving the model domains. The first subset includes the training set chemicals which are correctly predicted by the models, whereas the second subset comprises training set chemicals which are incorrectly predicted by the models. 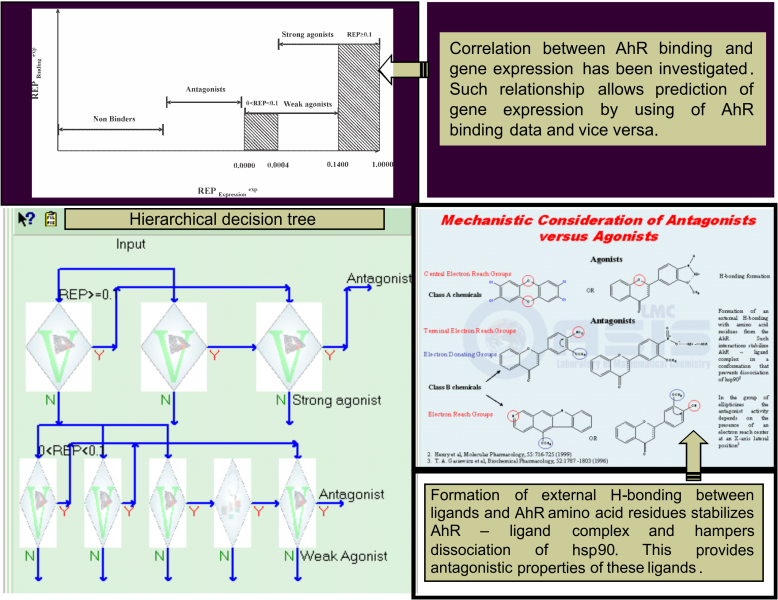