The presence of so-called endocrine disruptors in the environment has become a worldwide environmental concern. It has been concluded that such compounds can act in a same way as endogenous hormones eliciting a variety of adverse effects in both humans and wildlife.

A structurally diverse training data set containing 202 chemicals was obtained from the National Center for Toxicology Research [1]. The binding affinities of the chemicals from the training set were obtained from a competitive radiometric binding assay, using radiolabeled [3H]-R1881 as the tracer and androgen receptor recombinant rat protein expressed in Eshcerichia coli. The relative binding affinity for each chemical was determined as a ratio between the 50% inhibition of [3H]R1881 (IC50) and the IC50 of the competitor.

Chemicals in the training set were categorized according to their potency and grouped into four activity bins: highly active with RBA>10%; moderate with 0.1%<RBA<10%; low with 0.001%<RBA<0.1% and non active with RBA<0.001%. For each potency bin, the ability of the chemicals to bind the receptor was related to the distances between nucleophilic sites and structural features describing electronic and hydrophobic interactions between the receptor and ligands. Categorical models were derived for each binding affinity range in terms of specific distances, local (maximal donor delocalizability associated with the oxygen atom), global nucleophilicity (partial positive surface areas and energy of the highest occupied molecular orbital) and hydrophobicity (log Kow) of the molecules. An integral screening tool for predicting binding affinity to AR was constructed as a battery of models each associated with different activity bins [2] (Figure 1). 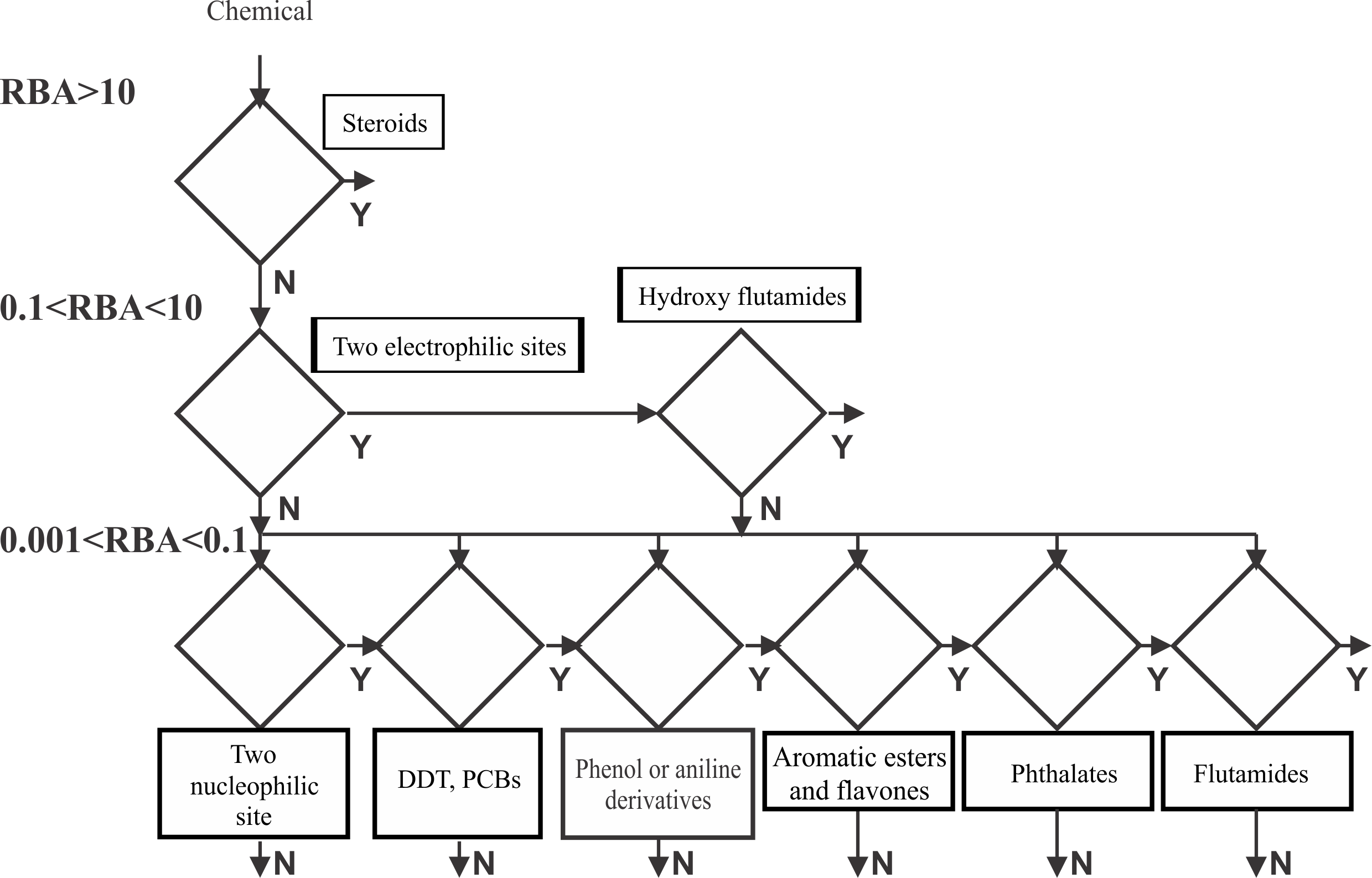 According to the performance of the model when applied on the training set chemicals (140 binders and 62 non binders), correct predictions are provided for:

Applicability domain of the ER binding model consists of four sub-domain layers: general parametric requirements, structural features and interpolation space [4]. Two chemical subsets are used for deriving the model domains. The first subset includes the training set chemicals which are correctly predicted by the models, whereas the second subset comprises training set chemicals which are incorrectly predicted by the models.

Interpolation space - estimates the population density of the parametric space defined by the explanatory variables of the QSAR models by making use the training set chemicals.

The performances of the model have been externally validated by screening exercise performed by the Dow Chemical Company [6]. In this study a set of more than 1800 ToxCast™ Phase II compounds were used for evaluation of the sensitivity and specificity of the model. The sensitivity (correct predictions for binders) was found to be greater than 90% and specificity (correct predictions for non-binders) 80% for predictions in the model domain. The authors recommend the use of the model as reliable tool for identification of compounds able to bind the androgen receptor.