The training dataset used for deriving the model contains 1887 structurally heterogeneous chemicals.  This large collection was prepared by combining data provided from CERI- Japan, US EPA and selected references from Prof. Katzelenbogen [1]. The set covers a broad range of structural classes, including steroids, diethylstilbestrol and related chemicals, flutamide derivatives, bisphenol A derivatives, alkylphenols, parabens, alkyloxyphenols, phthalates, DDTs, PCBs, and other chemicals. The experimental results for estrogen receptor (ER) binding are obtained by using test protocol for competitive binding with purified full-length human recombinant ERα and rainbow trout estrogen receptor. The ER binding affinity for each chemical is expressed as relative binding affinity (RBA), where estradiol has an affinity of 100%.

The ER binding model is based on the assumption that distances between electrophilic sites in the receptor determine the requirements for the binding mechanism [2]. Analysis of common reactivity patterns [1] of the most active estrogen binders based on the distance between electrophilic sites, resulted in identification of three distinct interaction types (Figure 1), summarized as: 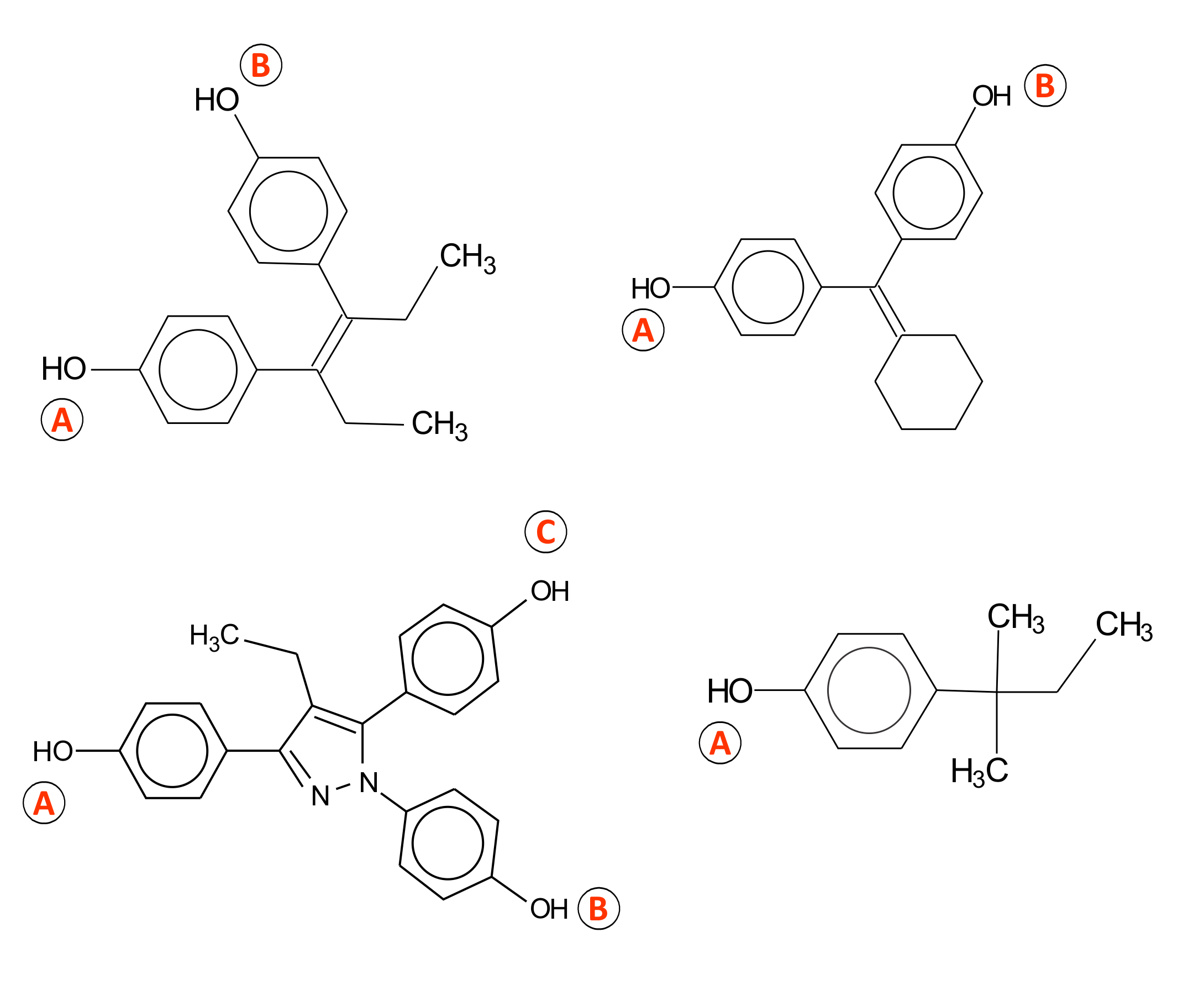 For the aims of the modeling process, the training set was split into five activity ranges with respect to the RBA values.  Strong ER binders (RBA > 10%), moderate (10% > RBA > 0.1%), weak binders (0.1 > RBA > 0.001), low (0.001 > RBA > 0.00001) and inactive (non binders) chemicals (RBA less than 0.001%).  The model is based on categories defined by distances between electrophilic sites and additional molecular descriptors. The ultimate model is organized as a battery (Figure 2) of all categories related to the each interaction type in the respective binding affinity range [1,3]. 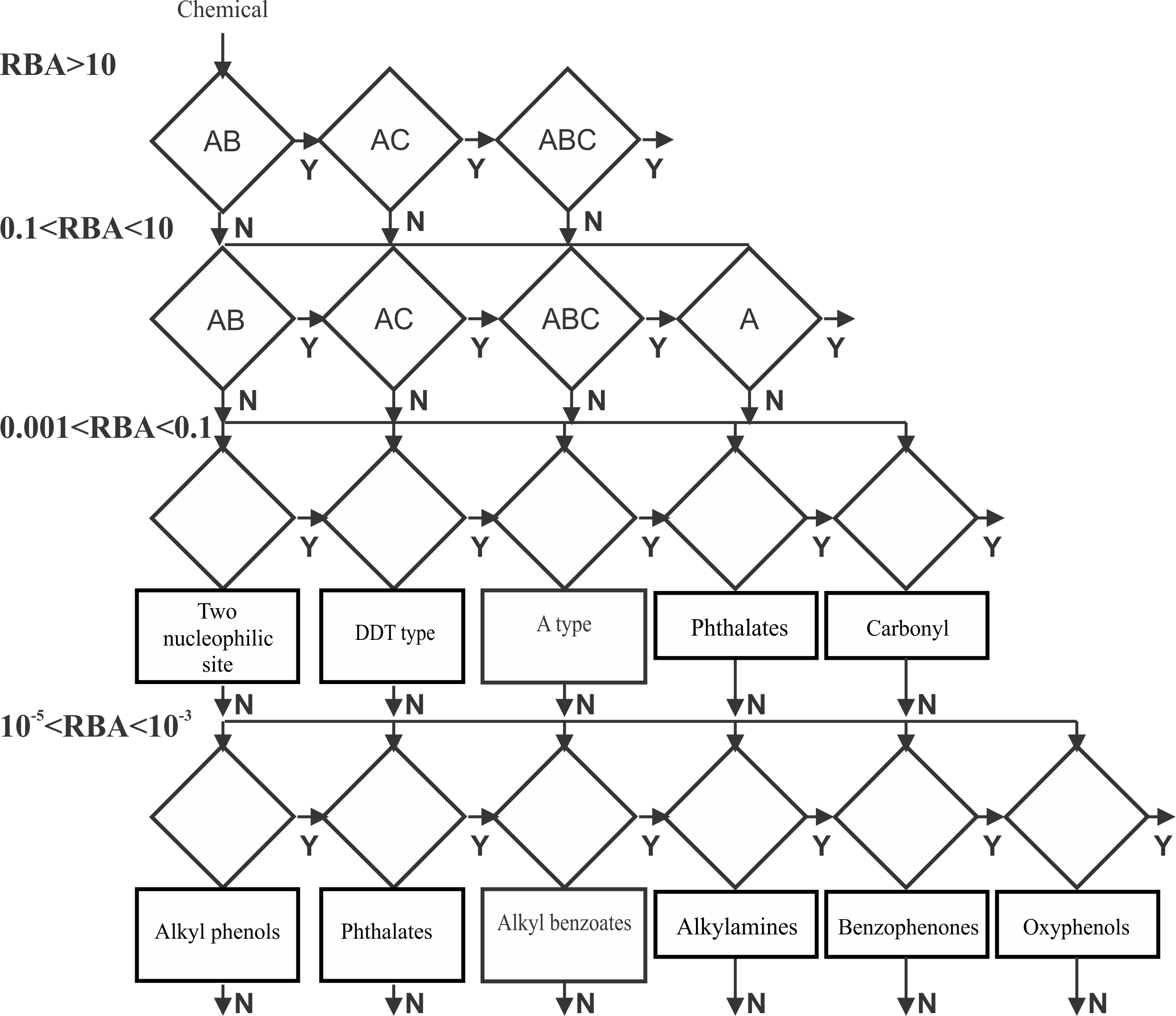 According to the performance of the model when applied on the training set chemicals (570 binders and 1317 non binders), correct predictions are provided for:

The standard testing protocol for estrogen binding does not require metabolic activation of the tested compounds. However, there are strong evidences that variety of chemicals could possess estrogenic affect after metabolic activation (Methoxybiphenyl, Methoxychlor) [5]. Thus the role of metabolism should be accounted in order to predict the ER binding potential of metabolically activated chemicals that do not elicit activity as parent compounds.

Based on the assumption that the main organ involved in metabolism is the liver, a metabolic simulator for rat liver (S9) in vitro metabolism is implemented in the model. The S9 metabolic simulator (the same used also in Ames mutagenicity and chromosomal aberrations models) could be applied on each chemical of interest by application of hierarchically ordered (based on their feasibility of occurrence) 542 metabolic reactions:

For each parent chemical all generated metabolites are submitted for predictions with the ER binding model (Figure 3). As a result the investigated chemicals could be predicted to be estrogenic as parent only, parent and metabolites, and metabolites only.

Applicability domain of the ER binding model consists of four sub-domain layers: 1) general parametric requirements, 2) structural features, 3) interpolation space and 4) domain of metabolism simulator [4]. Two chemical subsets are used for deriving the model domains 1-3. The first subset includes the training set chemicals which are correctly predicted by the models, whereas the second subset comprises training set chemicals which are incorrectly predicted by the models.

Interpolation space - estimates the population density of the parametric space defined by the explanatory variables of the QSAR models by making use the training set chemicals.

Domain of the metabolic simulator - determines the reliability of the simulated metabolism. 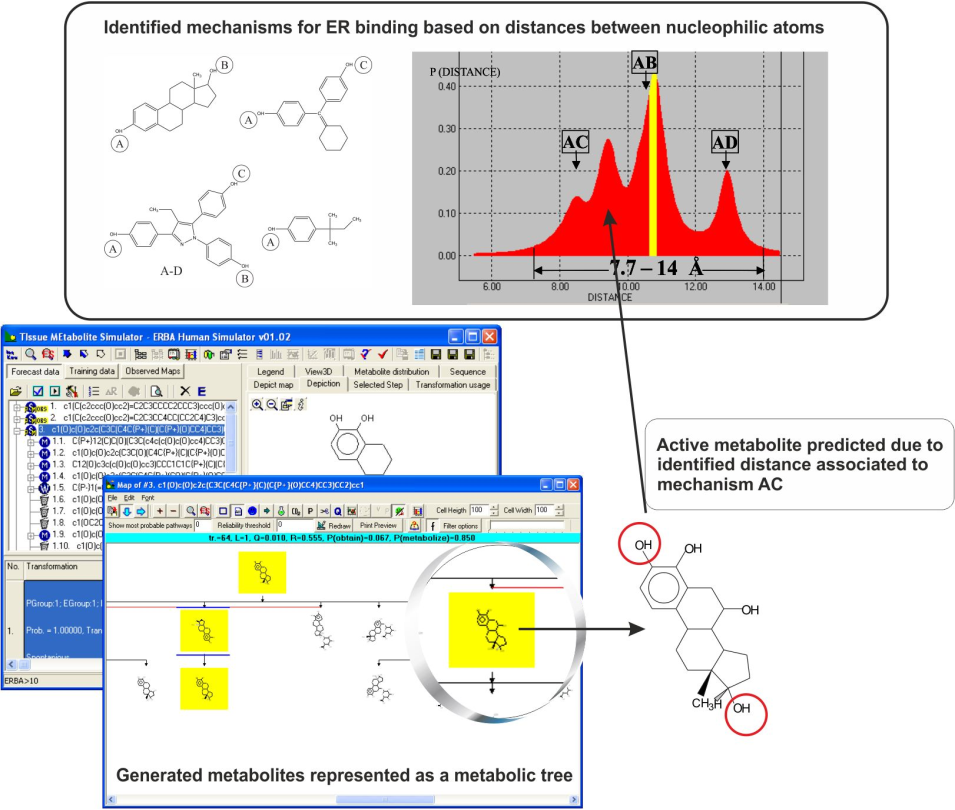