The in vitro Ames test identifies mutagenicity as a result of interactions of chemicals with DNA. Different strains of Salmonella typhimurium are specially constructed to detect either frameshift (e.g. strains TA1537 and TA1538) or point (e.g. strain TA1531) mutations [1]. All Salmonella strains carry some type of defective (mutant) gene that prevents them from synthesizing the amino acid histidine. In the presence of mutagenic chemicals, the defective gene may be mutated back to the functional state, allowing the bacterium to grow.

Collected are 4,190 chemicals from different sources (NTP database, NIHS Japan, ECVAM database, other literature sources) with experimental Ames data separated in three categories: 1,018 positive chemicals as parents, 470 chemicals positive after S9 metabolic activation (negative as parents), and 2,702 totally negative chemicals. These three classes of chemicals were considered as biologically dissimilar in the modeling process; i.e., chemicals being positive/negative as parents are distinguished from chemicals, which are positive/negative after metabolic activation. These subsets were subsequently modeled separately by the TIMES structural alerts approach. In this respect, there are two Ames models: with and without metabolic activation included in the TIMES system.

The toxicodynamic component of the Ames models, i.e., alerts (functionalities reacting with DNA) have been developed by chemicals which are positive as parents (one should be reminded that chemicals which are positive only after metabolic activation are negative as parents) [2]. Alerts associated with DNA interactions consist of boundaries, which provide the minimum structural requirements for interacting with DNA. Usually, additional structural and parametric boundaries are required for completing definition of alerts.

A subset of the training set is associated with each alert. In fact, these are chemicals used to define alerts boundaries. Cardinality of these local training sets depends on the number of substances captured by the alert boundaries. Only those alerts are included in the model for which a clear interpretation of the molecular interaction mechanism could be provided. Currently, the total number of alertinggroups included in the TIMES Ames models is 91 [3].

The training set of the Ames model (-S9) comprises chemicals which are positive (1,018) and negative (3,172) as parents. In this respect, the model predicts DNA-damaging effect of parent chemicals, only. Positive predictions are obtained when the complete set of structural/parametric boundaries of the alert(s) are met in the parent chemicals.

According to the performance of TIMES_Ames model (-S9) when applied on the training set chemicals, correct predictions are provided for:

The training set of the Ames model (+S9) comprises substances which are positive (470) and negative (2,702) after metabolic activation. Since both Ames models (-S9 and +S9) share the same alerts, the Ames model (+S9) predicts DNA-damaging effect of parent chemicals and their metabolic products, obtained after S9 metabolic activation. The toxicokinetic component of the model consists of a metabolic simulator which is trained to reproduce documented maps for mammalian liver metabolism of 261 chemicals. The number of generated metabolites is manageable which allows combining in a single modeling platform metabolic simulation of chemicals and their interaction with target macromolecules. The S9 metabolic simulator has its own training set which includes 542 metabolic reactions:

A characteristic feature of the in vitro metabolic simulator is the significant prevalence of Phase I reactions (85-90%) over Phase II reactions, which reflects the specificity of the in vitro experimental systems with respect to their metabolic capacity [4]. The metabolic simulator cannot estimate the reaction rates (e.g. kinetic constants, half-lives, etc.) but is able to provide tentative information for their probability. The logic of the Ames mutagenicity model (+S9) is illustrated in Figure 1:

According to the performance of TIMES_Ames model (+S9) when applied on the training set chemicals, correct predictions are provided for:

Each of the TIMES Ames models (-S9 and +S9) has its own model applicability domain, which supports the Ames predictions [5]. The applicability domains consist of three sub-domain layers: general parametric requirements, structural features and alert(s) reliability. Two chemical subsets are used for deriving the model domains. The first subset includes the training set chemicals which are correctly predicted by the models, whereas the second subset comprises training set chemicals which are incorrectly predicted by the models.

A large number of chemicals (12,000) with highly reliable Ames data have been used in a screening exercise of NIHS Japan to help increasing the predictive power of the major QSAR models for predicting Ames mutagenicity (http://www.nihs.go.jp/dgm/amesqsar.html). This exercise is scheduled for accomplishing in three Phases by distributing approximately 4,000 chemicals for screening in each Phase. So far, Phase I and II trails have been completed and the results were presented in the 17th International Conference on QSAR in Environmental and Health Sciences in Miami Beach, Florida USA in June of 2016.

In the Phase I and II trials, Ames data of totally 7,731 substances were delivered to vendors for screening by their Ames model. The Ames assays were conducted according to the OECD TG471 and Industrial Safety and Health Act in Japan under GLP-compliant conditions. Based on their Ames data, investigated chemicals are classified into three categories:

As a result of the screening, when accounting for the model domain, the TIMES Ames model (+S9) shows balanced predictions in terms of sensitivity of 80% (for Class A chemicals) and specificity of 91%. This result is acceptable given the interlaboratory reproducibility of Ames data which is 85% [6]. The Ames model (-S9) has not been evaluated in this screening exercise, because the experimental Ames data are provided without information whether they are obtained with or without S9 metabolic activation. Due to the lack of information for the presence or absence of S9 metabolic activation (critically important for TIMES models), the screened chemicals cannot be used for modifying the TIMES Ames models.

The predictions of in vitro Ames mutagenicity models could be reported as:

Users of the TIMES model may assess reliability of the predictions by evaluating the amount of mechanistic justification supporting the ultimate prediction.  In this respect, the modeling results could be considered as decision supporting rather than decision making outcome. 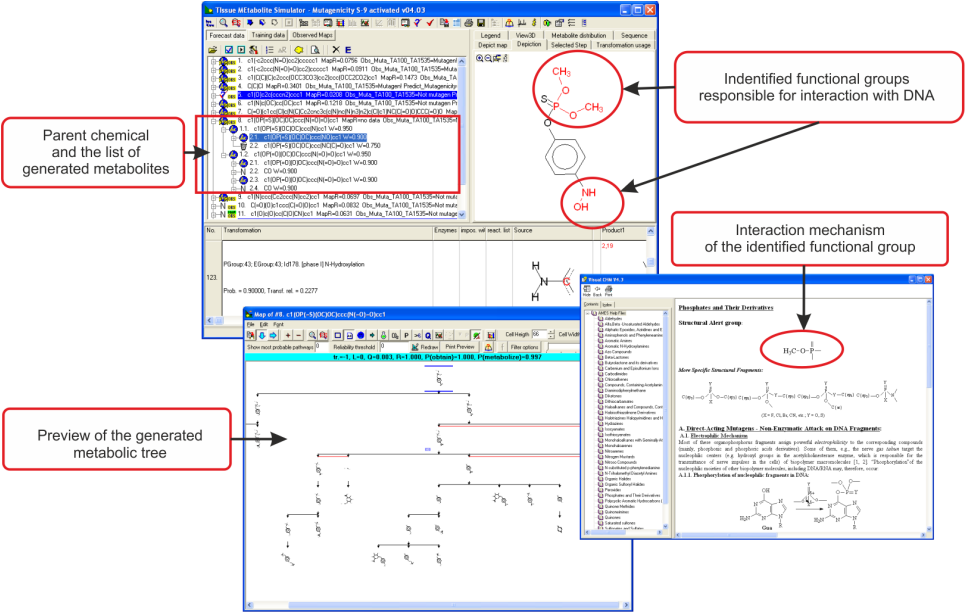