Photoinduced toxicity (Phototoxicity) is defined as a toxic response from a substance applied to the body which is either elicited or increased after subsequent exposure to light, or that is induced by skin irradiation after systemic administration of a substance. In Europe, since the year 2000, in vivo testing in animals for acute phototoxic potential is no longer permitted, since a successfully validated in vitro alternative method has been accepted for regulatory purposes [1]. Due to its high sensitivity and specificity, the validated 3T3 Neutral Red Uptake Phototoxicity Test (3T3-NRU-PT) is the core test, which is usually the only phototoxicity test required for assessment of the phototoxic potential of chemicals [2].

A training set containing 89 chemicals classified as positive or negative on the basis of results from the 3T3 neutral red uptake in vitro test (3T3 NRU) test was used [3]. This set covers a broad range of structural classes, including non-steroidal anti-inflammatory drugs (NSAIDs), antibacterials, drugs to treat skin diseases, synthetic fragrances, sunscreens and dyes. The experimental phototoxicity data is obtained by 3T3 Neutral Red Uptake Phototoxicity test for all training set chemicals. Two classes of chemicals were built on the basis of the photoirritation factor (PIF), defined as the ratio between cytotoxicity in the dark versus cytotoxicity in the presence of UV. A negative call was assigned when PIF values were below 2; a positive call was assigned when PIF values were above 5. Chemicals with PIF values between 2 and 5 were excluded from this analysis since those results are considered to be equivocal [3].

The most commonly reported process is phototoxicity via oxidative reactions. The chromophore in its excited state transfers energy or electrons to oxygen and generates reactive oxygen species (ROS) such as superoxide anion (O.-2) after electron transfer (type I reaction) or singlet oxygen (1O2) after energy transfer (type II reaction). O.-2 can lead to H2O2 after dismutation, and H2O2 can produce the highly toxic hydroxyl radical (OH.).

Photo-induced toxicity was considered as an outcome of competing processes between structural (such as stability and light absorbance of chemicals) and environmental (energy quanta with specific wave length) factors. A molecular descriptor was sought which could be computed from structure rather than measured experimentally [3]. The energy gap (EGAP = EHOMO - ELUMO) was the molecular parameter which was assumed to be suitable for assessing the stabilization of the toxicant and light absorbance (Figure 1). 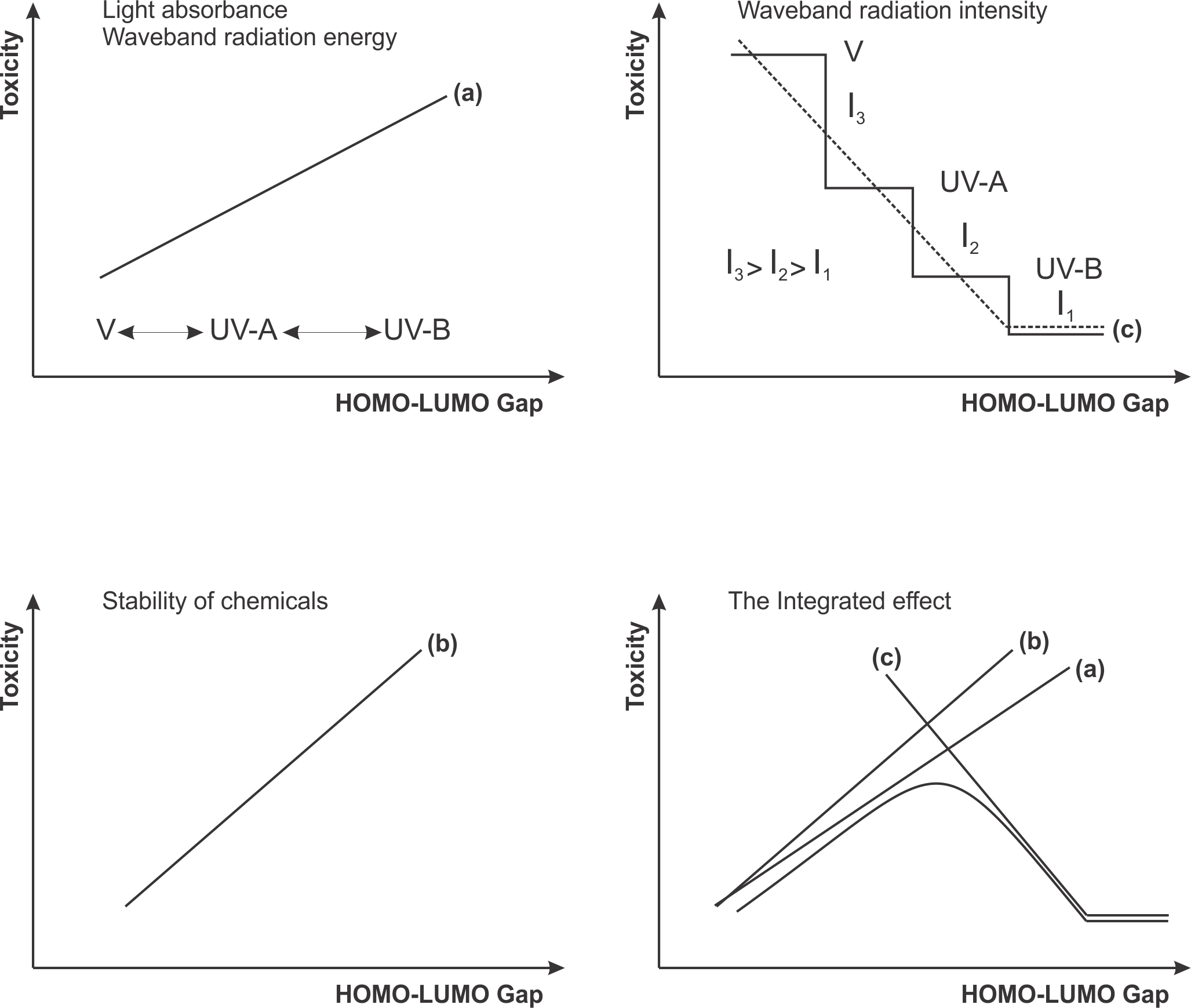 Figure 1. Phototoxicity is the result of an internal factor (molecular structure) and an external factor (sun irradiation): (a) light absorbance, (b) stability of chemicals, (c) waveband radiation intensity and (d) the integrated effect.

A phototoxic window was found in the range of EGAP from 6.50 to 8.60 eV [3] (Figure 2). Based on calculated values for EGAP the model predicts chemicals to be ''phototoxic or photodegradable", or ''non-phototoxic and non-photodegradable". 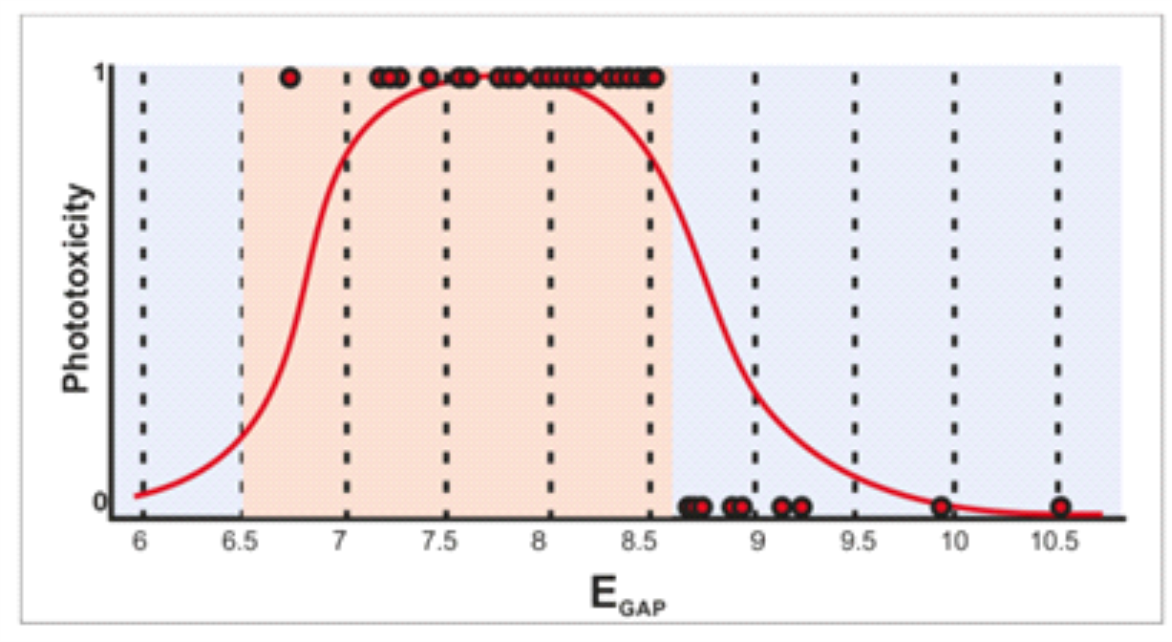 Figure 2. The EGAP phototoxicity window was found in range from 6.50 to 8.60 eV (X axis). Chemicals with a negative or positive call in the 3T3 NRU test have on the Y axis a null value or a value equal to 2, respectively.

The model performance was assessed on the basis of prediction made for the training set chemicals. The sensitivity and specificity of predictions are 88% and 71%, respectively.

Applicability domain of the model consists of two sub-domain layers: general parametric requirements and structural features [4]. Two chemical subsets are used for deriving the model domains. The first subset includes the training set chemicals which are correctly predicted by the models, whereas the second subset comprises training set chemicals which are incorrectly predicted by the models.

The model performance was assessed on the basis of prediction made for the training set chemicals. The sensitivity and specificity of predictions are 88% and 71%, respectively. 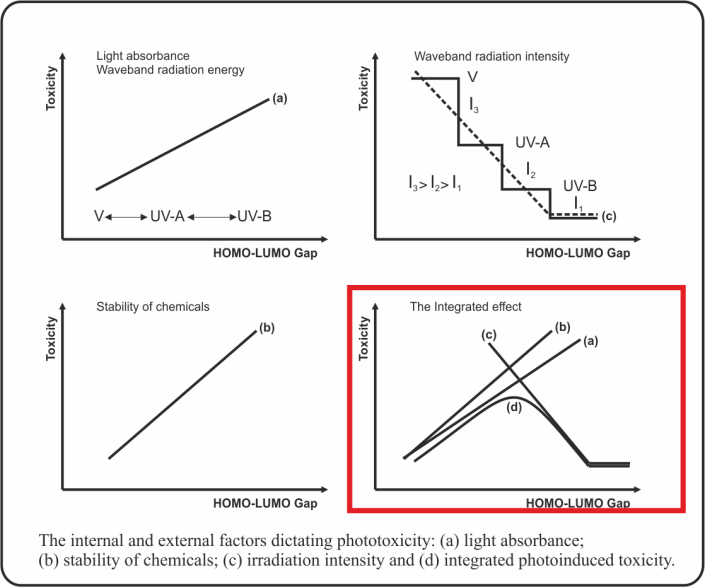 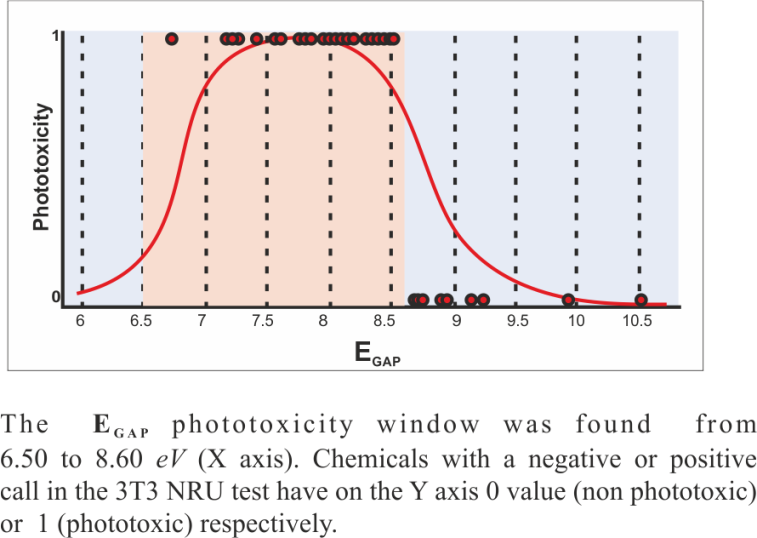